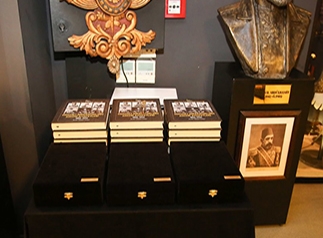 Hisart Live History Museum, which creates a historical and cultural bridge and allows the discovery of interesting details that shape the past, is opening its doors to visitors again with its renewed exhibition halls as of February 1, 2022. Before the reopening, a ceremony was held at the museum with the participation of many distinguished guests, including Beyoğlu Mayor Haydar Ali Yıldız, Kağıthane Mayor Mevlüt Öztekin, Istanbul Provincial Culture and Tourism Deputy Director Emel Kamar.

At the ceremony hosted by Nejat Çuhadaroğlu, the Founder of Hisart Live History Museum, the second of the museum's cultural publications and the most comprehensive work in its category, the book "Ottoman Empire Military Clothing 1826-1922" was introduced.

Beyoğlu Mayor Yıldız: “Young people should be brought to this museum”

Speaking at the ceremony, Beyoğlu Mayor Haydar Ali Yıldız stated that young people should learn about the past as well as the future by bringing them to the Hisart Museum and said, “This museum, which consists of hundreds of collections that Nejat has created with great effort over the years, is brought to our world of culture and civilization with its enriched form. The brain of Nejat Çuhadaroğlu shows us the magnitude of the values ​​produced by the land they built. Let's bring our young people in Beyoğlu and Kağıthane to this museum, starting with ourselves. We want them to lean back, look to the present and look to the future. Our young people will know about Manzikert, Çanakkale and the National Struggle, but they will also learn about innovation, artificial intelligence and the last stage of internet technologies.

Kagithane Mayor Öztekin: "We can arouse curiosity in our children with traveling history trucks"

Kagithane Mayor Mevlüt Öztekin emphasized that the works in Hisart Live History Museum are more precious than the other, and said, “Our children come to visit this museum somehow. But we need to arouse curiosity in them. Maybe we can build mobile trucks. Those trucks visit our schools. We can show some of it there. Afterwards, kids can visit the Live History Museum to see it all. There are many valuable works. We are a nation that came with the consciousness of history. There are 1,500-year-old artifacts here, each more valuable than the other. In fact, we see that the development of civilizations is also described here," he said.

Nejat Çuhadaroğlu: “There are many unique works in this museum in the world”

The founder of the museum, Nejat Çuhadaroğlu, continued his speech underlining that Hisart Live History Museum is the first and only in the world in its own way:

“While trying to shed light on a 1500-year history in our museum, our aim is to encourage especially our young people to protect our culture and civilization and to keep it alive in the future. We know that those who do not know their history cannot establish their future correctly.

History is as important a science as mathematics, physics and chemistry. Because history is memory. Memory is the sum of that person's life, education, and experiences. People who do not have these cannot see their future and cannot complete their personal development. At the point of learning history correctly, we continue to serve with our publications as well as our museum. I would like to proudly announce to you that the book "Ottoman Empire Military Clothing 1826-1922", written by our esteemed author Kadir Türker Geçer, is among our publications. We believe that it is a unique work in terms of learning the history correctly and reaching the right sources. Our efforts will continue to increase day by day in order to ensure that young people have access to accurate historical information. Our museum has been closed for about 2 years due to the pandemic. It will reopen to visitors at the beginning of February. We turned the pandemic period into an advantage. We renewed our museum for 2 years."

Author Kadir Türker Geçer: “Hisart is richer than most museums in Europe”

Kadir Türker Geçer, author of the book “Ottoman Empire Military Clothing 1826-1922”, said that Hisart is richer in content and exhibition technique than most museums in Europe. Transferring that they have been working on the book project for about 6 years, Geçer said, "Hisart has all the clothes used by our army in terms of uniforms and uniform details." used the phrase.

After the speeches, Nejat Çuhadaroğlu presented plaques to Beyoğlu Mayor Haydar Ali Yıldız and Kağıthane Mayor Mevlüt Öztekin for their support to history.

Hisart Live History Museum was opened in May 2014 after the Çuhadaroğlu Group of Companies' building in İstanbul Çağlayan was restored. The museum, where tens of thousands of works are exhibited in an exhibition area of ​​2000 m2 consisting of 6 floors, is the place where the unique works in the world as well as the personal belongings of the Ottoman Sultans in particular.

It also hosts. In the Hisart Live History Museum, which covers 1500 years of history, military and ethnographic artifacts belonging to the civilizations and wars that had an impact on world history such as the Roman Empire, the Anatolian Seljuk State, the Ottoman Empire, the War of Independence, and the 1st and 2nd World Wars are exhibited.

Hisart Live History Museum, which aims to increase the historical awareness of our youth by exhibiting its collections from time to time in different locations in the country, is the most prestigious and valuable award given by the Ministry of Culture and Tourism to those who contribute to the cultural heritage and the world of art, the “Ministry of Culture and Tourism”. He is also the owner of the 2020 Special Award.